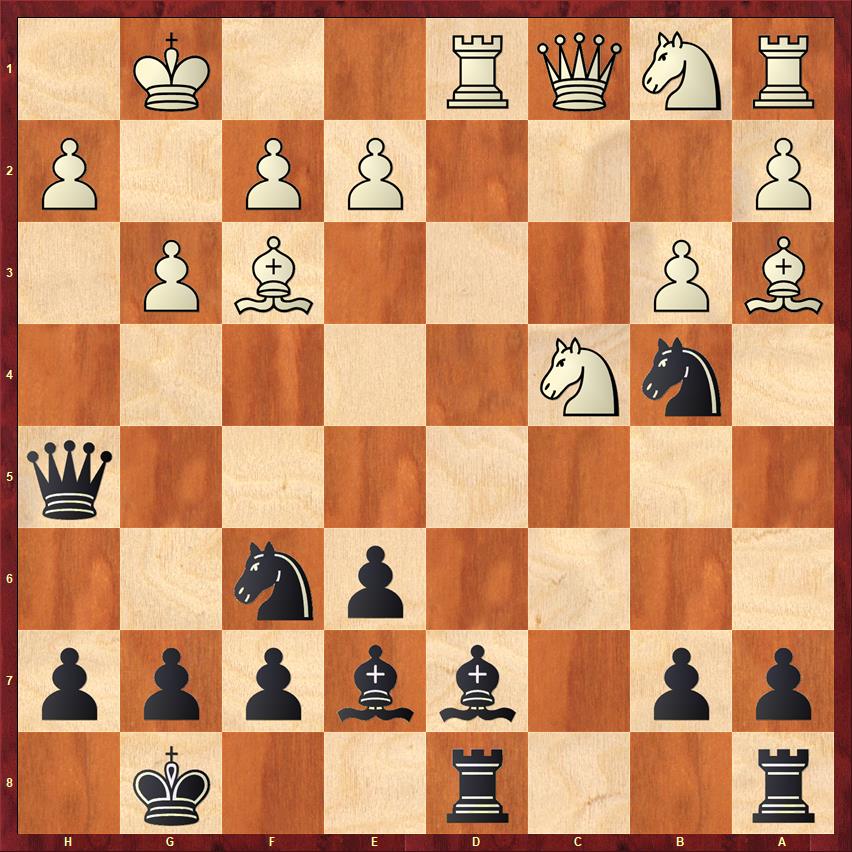 So this it where the game ends and the analysis begins.

I played some rare line against the catalan opening and got a perfectly fine position. Here, with maybe 30 against 50 minutes on the clock, I made a draw by repetition with 15. …Qh3 16.Bg2 Qh5 etc. I wasn’t unhappy about it, as my opponent is a very decent player and a draw with the black pieces (especially in a team event) is nothing to complain about.

However, I should have looked at 15. …Ng4 a bit more extensively.

By the way, that is a great starting point for a calculation exercise. Try to find out as much as possible about the ensuing variations before reading this article, If you’d like.

I (mistakenly) didn’t ponder on this position for too long. For example, I thought that after the logical move 18. …Rac8?! White simply replies with 19.Nc3 and I’m a piece down. [In fact, for some reason even that is not too bad after 19. …Qa6!, but it’s messy and still better for White]

So what to do instead?

I think I might have thought about this for a split second, but If I did, I stopped my calculation after 19.f4. Black’s a piece down and both knight and bishop are hanging in the air.

I imagine this is where really strong players would have continued calculating, realising that White has some major problems himself, being so underdeveloped, having vulnerable pieces on d7/a1 (!) and, as if that wouldn’t be enough, an unprotected king. 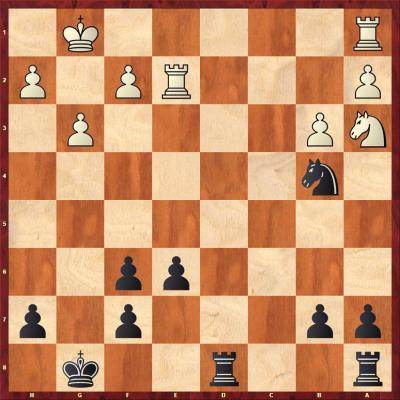 …and Black’s a clean pawn up. Still, this might be White’s best chance.

So what’s wrong with… 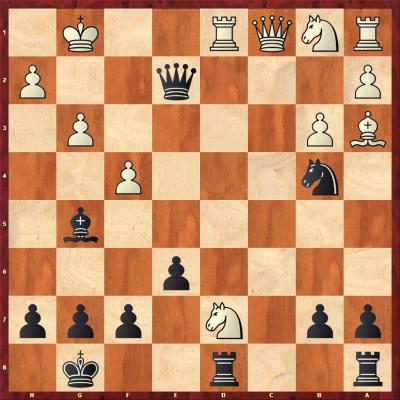 First off, even 19. …Be7!? should give more than enough compensation for the piece. After provoking a huge weakness, our bishop simply retreats, leaving White with a very difficult position.

There is something much stronger and, without a doubt, far more spectacular though:

And here we see the point of the operation. It’s a double attack: We threaten to capture the knight as well as to play Qd4+ picking up the rook, perfectly demonstrating the weak points in White’s position.

An important detail here is that our queen will not be trapped once the rook is taken:

And we’re left with a rook and two pawns in exchange for bishop and knight, but, most importantly, our opponents king is immensely vulnerable. Which is one of the reasons why 19. …Bxf4 was so strong – but there is another, tactically indispensible one worth pointing out. Let’s back up and look at why 19. …Nd3? instead (same idea) does in fact not work: 20.Qd2! (diagram)

With a lethal threat of Nh3#.

Despite being a relatively short draw, the game is pretty instructive in regards to calculation – or the lack thereof. There certainly are a few lessons to be learned:

1) When stopping the calculation of a certain variation, try to visualise and think about the resulting position for a few additional seconds before deciding on whether to go for or reject it: there might be ideas and motifs you don’t spot immediately.

2) When calculating complex and/or deep variations, don’t forget to identify potential weak points in your opponents position and try to make use of them.

3) This wasn’t exactly one of those situations, but when you have to decide between taking a safe draw – or even accepting a draw offer from your opponent –  and playing on in a complex position, take your time considering and calculating the latter option: after all, you can bail out at any moment.